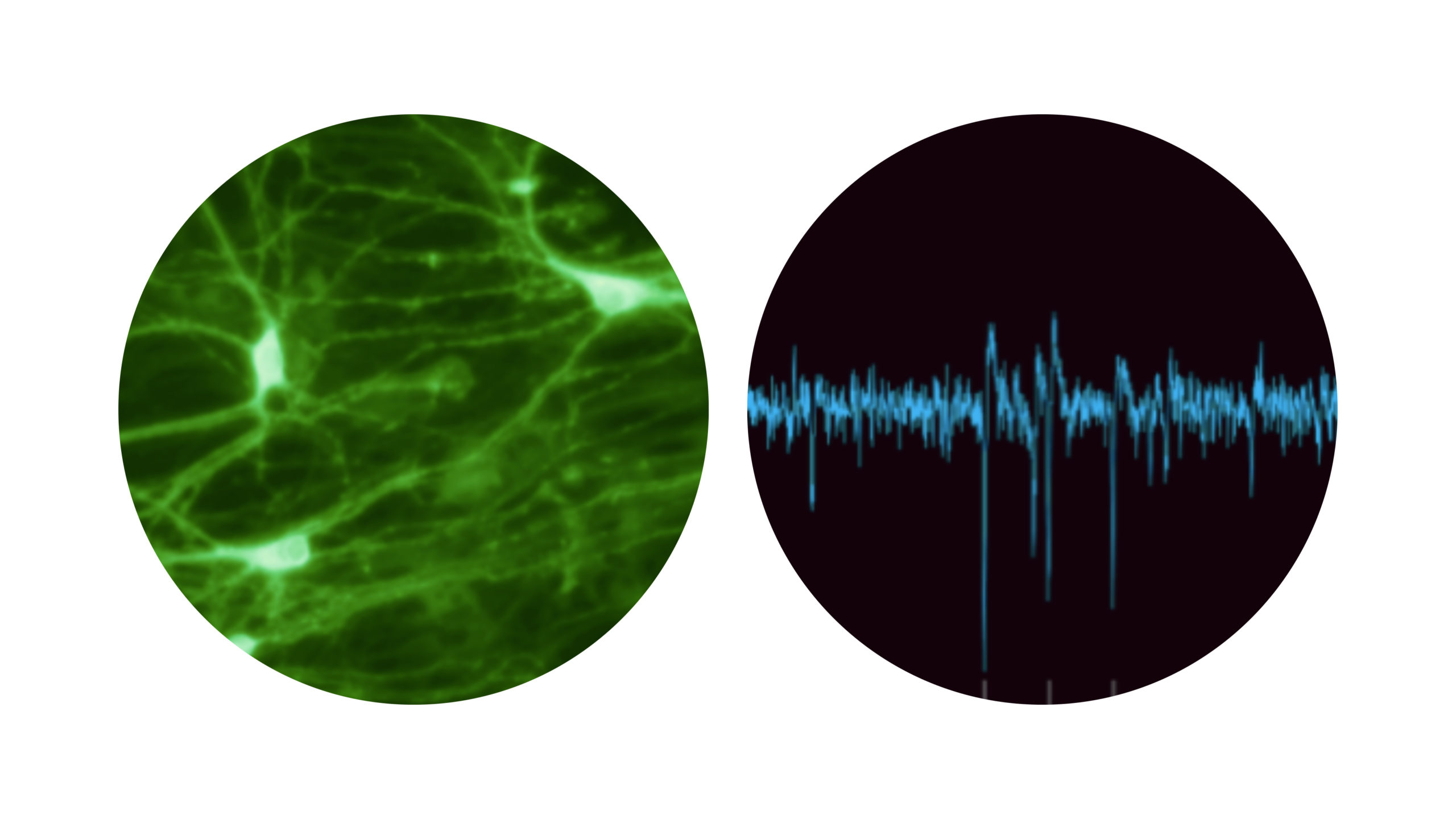 Signal processing between neurons occurs via complex neuronal connections ending with synapses. Images and recording were acquired at the laboratory of Final Spark.

The ability to form large number of strong connections between neurons in the brain is believed to be one of the crucial factors affecting brain function. This is quite clear, given the fact that our cognitive function depends on effective communication between different neurons. This communication occurs via synapses, which allow electrical or chemical signal transmission between connected neurons.

Two main processes affecting the number and strength of synaptic connections are:

These processes affect synaptic connectivity, which is the overall strength of the neuronal network and decides on how fast and in how many directions the signal can be transmitted between neurons.

Signals between neurons are transmitted via chemical (neurotransmitter) or electrical (electric current causing voltage changes) carrier. This information passes between neurons when signal is released from presynaptic cell (the cell from which the signal comes from) and is affecting postsynaptic cell (the cell which receives the signal). Neurotransmitter binds to the receptors of the postsynaptic cell, while electric signal induces the voltage change in the postsynaptic cell. The signal can be transmitted and processed by multiple synapses further this way allowing the communication through multiple neurons. Therefore, synapse can be considered as a minimal computation unit in the brain [1]

The mechanisms affecting synapses can be studied on different levels of complexity.

Understanding the structure and function of synapses through electrophysiology

Studying the signal transduction through synapses allows better understanding of their function and structure. Patch-clamp method allows to study individual ion channels on the cell surface very precisely. It is also possible to simultaneously study several neurons with patch-clamp, however it is technically very challenging.  More feasible technique to study the formation of synaptic connections in multiple neurons and signal processing between them is by using Multielectrode Arrays (MEAs). MEAs are very small, cell-size electrodes attached to a holding material which keeps them intact. Electrodes are coated with an insulator to prevent direct contact of the neurons with electrodes and adhesion molecules to allow the growth of the living cells on this artificial surface.

MEAs allow better measurement of behaviour of the neurons, including non-invasive measurement of spontaneous and induced neuroelectric and neurochemical activity. This activity can be not only measured, but also modulated by applying specific electric or chemical signals on the neurons [2]. That opens the way for studying characteristics of the neuronal network related to synapses and how they are affected by external stimuli:

On a structural level we can study:

On a functional level we can study:

Tools for understanding how brain works through relating cognitive functions to synaptic plasticity.

These complex events can also be studies on a macro level, which can be divided in two main approached:

These biomarkers allow for studying the correlation between synaptic plasticity and its behavioural or cognitive implications.

The way it is done in animal studies is that experimental animals can be subjected to various behaviour or cognitive tests, which can be accompanied by non-invasive or post-mortem analysis of brain tissue.

In humans, techniques to analyse brain structure and function are more limited, but still potent. Non-invasive brain imaging allows monitoring the role of synaptic plasticity in our cognition, which can be affected by various pharmacological [8] and environmental [9] factors as well as brain diseases and ageing [10].