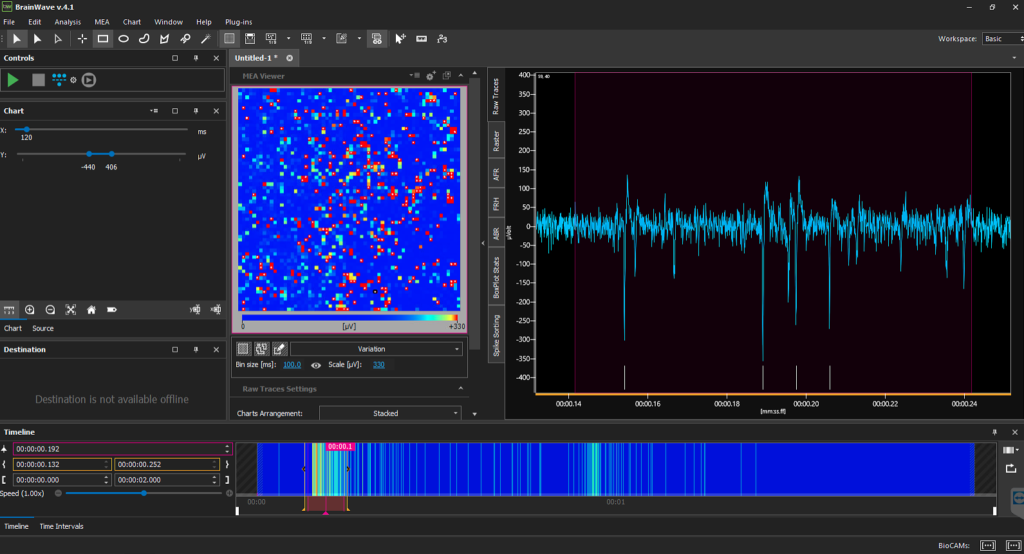 The signals read from a Biological Neural Network (BNN) unit are complex signals which require dedicated processing. Depending on the MEA spatial density and temporal resolution, gigabits of uncompressed signal data may be generated every minute. While low-scale signal analysis such as identifying the presence or absence of spike bursts may be sufficient for certain applications, for instance as a simple way to test the health of the BNN culture under specific conditions, more advanced neuroscience studies require finer grain analysis.

In practice, the MEA readout streams may be recorded and analyzed at different scales with a combination of dedicated signal compression, multiplexing, filtering on-chip processing and software tools [1][2][3]. For recording and transferring the signals, HDF5 is the most commonly used data format. HDF5 was originally designed at the US National Center for Supercomputing Applications to address the needs for a portable scientific data format suitable for large date sets, such as those generated by the NASA Earth Observing System project in the 1990s [4]. It is thus non-specific to neurophysiology data, and has been reported to suffer a number of limitations in related applications [5]. Nevertheless, it has become a de facto neuroscience data container standard due its wide support in various software platforms and languages commonly used by scientists (e.g. Matlab, Python, R…). Commercial MEA providers for instance such as 3Brain [6] or Maxwell Biosystems [7] also support HDF5 for the data generated by their MEA circuits. HDF5 however solely specifies the container; for the data format itself, various specifications exist, such as for instance the NSDF format for large simulation datasets [8], the BRAIN project NWB consortium effort which released their 2.0 version in February 2019 [9][10].

Regarding the analysis of MEA signals, a number of open source tools have been made available to the scientific community, some including dedicated visualization for specific features of interest [11][12] [13]. One of the most challenging tasks currently remains the sorting of the individual spike signals issued from the BNN, to isolate them and individually assign them to a spiking neuron out from the multiple spatial MEA signal captures, as the complexity of this computing task significantly increases with the MEA density. Various statistical approaches may be used to automatize spike sorting, as discussed for instance in [14]. Beyond spike detection, on the temporal side, spike burst patterns also deserve dedicated analysis tools, for instance from pre-processed spike time stamps data out of MEA recordings [15].

The bioserver.net platform currently integrates commercial HD-MEA systems enabling high-throughput MEA recordings. The online API to the experimentation BNN platform aims at facilitating the computational access to experiment with state-of-the-art bio-engineering technologies. Various options for pre-analysis and data transfers to match the needs of the end users are still open at this stage. Do not hesitate to contact us shall you have any specific questions or requirements.